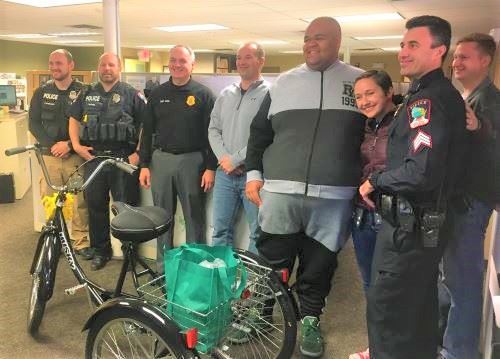 A New Trike for Ty

Something magical happened Friday, October 25, 2019, when Tyon "Ty" Edwards showed up at the River Falls Police Department under the guise of retrieving his lost ID. Officers, Ty’s parents, and others, were waiting with a new adult-sized tricycle. Ty’s surprised look, followed by a great big smile, tells it all.

The story began when retired Bloomer Police Chief Richard Carr saw Ty riding in River Falls with a bent frame on his tricycle that caused it to wobble. Chief Carr mentioned it to River Falls Police Chief Gordon Young who was able to track down Ty’s mom to inquire about the trike. Because of the damaged frame, she said it was beyond repair.

Chief Young looked for a way to help and was eventually connected with University of Wisconsin-River Falls employee, Elise Koop, who had received a Random Acts grant in 2017 to buy a new bike for Francis Johnson, a beloved resident and retired UWRF food service worker. After Francis died suddenly in February 2018, Elise established a Francis Johnson Memorial Fund with the goal of purchasing a bike a year for a deserving resident.

Memorial funds were used to purchase a replacement trike for Ty Johnson and a plan was devised for the surprise. Police Officer Logan Dohmeier assembled the trike which arrived at the station in two big boxes. This true community effort helped Ty remain independent and mobile. And, there’s that big smile that made it all worth it.

This latest donation has depleted the funds in the Memorial Fund, but Elise Koop would like to see the good work continue. You can help to keep the bike fund alive by sending a donation via check to First National Bank of River Falls, 104 E. Locust St., River Falls, WI 54022, made out to the “Francis Johnson Memorial Fund.”